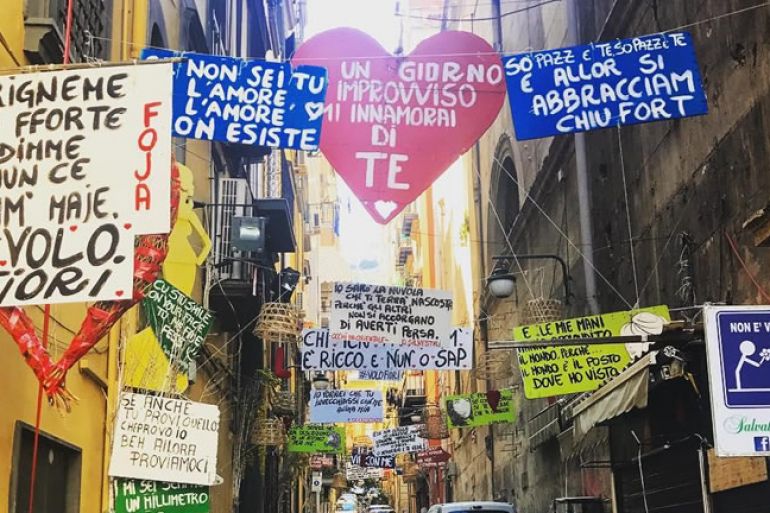 Once upon a time, Naples was the cultural destination of Italy. “Do you want to know if there is a spark within you? Run, no, fly to Naples,” Jean-Jacques Rousseau advised his Parisian cohorts in 1768. It was here that Caravaggio painted some of his greatest masterpieces, and Mozart begged his father to get him a gig.

Things have changed. Now, when my American friends call to tell me they’re coming to Naples, they usually use the verb “passing through”. After visiting Rome and Florence, they’re heading to Capri, Ischia or the Amalfi Coast and Naples is the embarkation point. They have just enough time for a pizza, and where do I recommend? Great, I think, you’re stopping to smell the pizza. Not everybody does. I tell them about the mouthwatering pizzerias Sorbillo, Michele and Starita. Keep your eyes on your watch, though, because there’s traffic and you don’t want to miss your boat.

Stopping in Naples for a pizza is better than not stopping in Naples, of course. But it pains me to think that a rushed meal is all they will take from this magical place. One full day, on the other hand, gives a chance to experience some of the city’s most breathtaking sites without losing a sense of Neapolitan calma. The day should be divided into two parts around a seated meal:  before lunch is more energetic and site-oriented, after lunch is digest-while-you-stroll. In the morning, the first stop is the home of the patron saint of Naples, San Gennaro, in his chapel in the magnificent Duomo church. San Gennaro was a martyr who was beheaded in the fourth century, and is the grand poo-bah of the city. In the baroque chapel, after taking in the impossible gold and silver statues as well as the image of the saint himself with his red cape and pointy hat, look up and you will see one of the most crowded, colorful scenes of heaven that exists. It looks a lot like a Neapolitan kitchen during Sunday lunch, with all the saints elbowing each other out for some more of the ragù. (Where’s Jesus in this church, Mommy? My son asked once, and I had to admit I couldn’t find him!)

If you think this chapel shines and shimmers, you’ll be amazed by the treasure of San Gennaro next door. The first thing you’ll find in the Museo del Tesoro di San Gennaro is the legal contract that the Saint signed promising to protect the city of Naples. In exchange, Neapolitans and foreign royalty over the years have offered him priceless ornaments. In times of war, poverty and devastation, artisans were crafting what many say is the most valuable collection of jewels in the world –more valuable even than the Queen of England’s crown jewels. I gasped audibly when I first saw his miter, a bishop’s hat made to crown a bust of the saint in processions. It has no less than 3694 gems (including diamonds, rubies, and emeralds) embedded in solid gold.

(This is the city, I remind you, of some of the most talented thieves in the world. No jewel of San Gennaro has ever, in the hundreds of years it’s been around, been touched. The saint, apparently, would go ballistic and the city would suffer. I asked a Neapolitan friend about this. She looked at me like I was crazy. “They’re criminals,” she told me. “They’re not stupid!”)

It’s a 10-minute walk down the Via dei Tribunali to the Piazza San Domenico Maggiore. At the Scaturchio caffè, order a Neapolitan sfogliatella pastry (there are two kinds: the round doughy frolla or the crispy riccia) and a shot of espresso. The coffee in Naples must be ordered zuccherato – already sugared – to be at its nectary best. Stand at the bar with your hot sfogliatella and shoot the coffee back fast.  People will be bumping into you and shouting near your face, but what’s happening with your palate right now will take precedence.

Cross the piazza to find the private chapel of Sansevero, home to the statue of the Veiled Christ. The first time I saw the sculpture, tears started running down my face without my even realizing it. There is something so heartbreakingly vulnerable about the swollen vein on Jesus’s  forehead, and the faint scars from the nails in his hands. When I got my act together, my mind started to swim with questions I wanted to ask the little-known Neapolitan sculptor who created it. How do you make marble wispy? How can you chisel Jesus’ wounds in a block of stone underneath the marble shroud?

Time to take a walk to the area of San Gregorio Armeno, the narrow street where Neapolitan artisans have displayed their nativity scenes since the 17th century. The crèche is a centerpiece of Christmas in Naples, and families compete over who has the most elaborate manger. They’ve gone way beyond the ox and ass and wisemen: now you can find spaghetti a vongole and Napoli soccer players, statues of Obama and Princess Kate, little moving scenes of all sorts of trades – the bookseller, fishmonger, dentist. Having fun with it all in myriad incarnations is the Neapolitan clown, Pulcinella, with his white pantsuit, red undershirt and black mask.

Neapolitans are masters at the art of arrangiarsi, finding a creative way to make money when times are hard. In this area, you can stop at the various stands and stalls to see what people have come up with. Recently I saw a man who was selling “University Degrees” for ten euros, another offered his services in helping older people cross the street in downtown Naples. And everyone is ready to sell you a terracotta chili pepper, a talisman that keeps the evil eye away.

You’re hungry and tired and it’s time for a taxi to take you to Antonio e Antonio, a restaurant that overlooks the medieval castle on the bay. Take your time with this meal, ti prego! In Naples, lunch must not be rushed. Most places close from 2 until 4 or so anyway, so follow the rest of the city and feed yourself come si deve – in the way that is right.

Sitting outside studying the menu, you might experience a classic Neapolitan gastronomic dilemma: to pizza or not to pizza. My usual solution is to get one to share so you can have room for the fresh mozzarella di bufala and the southern vegetable dishes — parmigiana di melanzane made with the most intense tomato and smoky provola, for example, or zucchini alla scapece, made with mint and garlic. Still hungry? Have the lightly fried calamari sprayed with the juice of a pungent Amalfi coast lemon.

If you’re tempted to order coffee after this divine lunch, resist. No self-respecting Neapolitan orders coffee at a restaurant, only at a bar. As you digest, sleepy and sated, mosey up to the Piazza del Plebiscito, where the spectacular Gambrinus caffè looks like the setting of an 18th century salon. It’s worth seeing for the décor, but my husband and I get our coffee at the Vero Caffé del Professore right across the way. If you like hazelnut, the caffé alla nocciola is something from another world – a little explosion of caffeine and every creamy dessert that you ever loved.

The city is beginning to wake up after its riposo, and the stroll you now take up the Via Toledo, by the San Carlo opera house and the stunning Galleria Umberto, needs to be meandering and luxurious (a determined, American stride will invoke comments in Neapolitan dialect like, “The train’s about to leave, get out of her way people!”) Stop to look in shop windows. Peek up to your left to see the alleyways of the Spanish Quarter, where hanging laundry ties the buildings together and mothers’ voices shout to kids kicking soccer balls in the street.

On Via Toledo, you’ll make your way to the Palazzo Zevallos Stigliano, an ornate private palace that now houses Caravaggio’s last painting, the Martyrdom of St. Ursula. (Caravaggio did not experience Naples with any sort of calma: he was hunted and crazed and in desperate need of a papal pardon. In his mad rush out of the city he consigned the canvas with the paint still wet, and unexperienced servants left it out in the sun to dry.) It is urgent and passionate and explosively beautiful: a perfect endnote to your day in Naples.

Send this to a friend